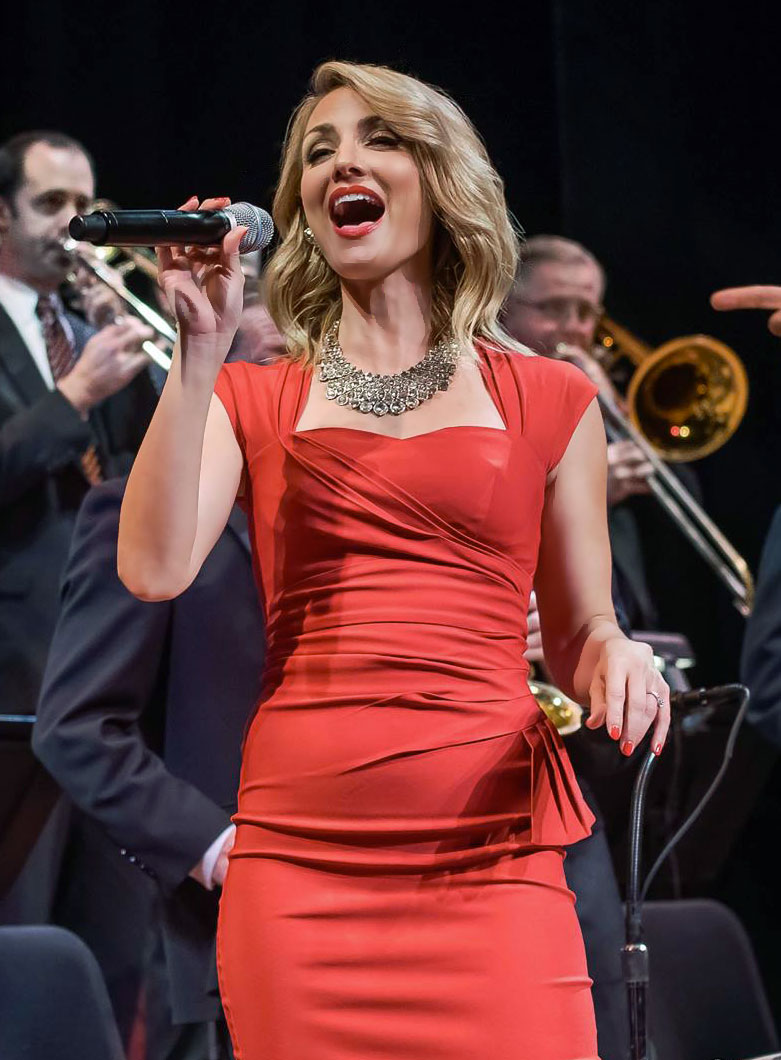 With a career that reaches from the Broadway Stage to the Hollywood Soundstage, singer/actor Carly Thomas Smith has entertained audiences around the world with her powerhouse vocals and emotionally charged storytelling.

“How does that big voice come out of that little body?” is a question Carly has been hearing since she first opened her mouth to perform at the Minnesota State Fair while still in high school. “To this day, I still get asked some version of that question almost every time I sing!” Honing her skills as a teenager surrounded by the “Minneapolis Sound,” she quickly found a style that was all her own, steeped in Jazz musicality, R&B soul, Pop sensibility, and tied together with Musical Theater storytelling. This distinctive versatility as a vocalist and actress has allowed her to work in almost every facet of the entertainment industry.

Carly’s first big gig came shortly after graduating from Sarah Lawrence College when she was cast in the Pulitzer Prize and Tony Award winning Broadway musical RENT. “I was so lucky…that’s how I got my Equity card!” She’s racked up some pretty impressive Theater credits since then. When the musical We Will Rock You staged it’s first American production, Carly was handpicked by Queen’s Brian May & Roger Taylor, director Ben Elton & producer Robert De Niro for the role of “Oz.” Shortly after, she went on to play the role of “Lorraine” in the Las Vegas production of the Tony Award winning musical Jersey Boys. Most recently, Carly gave a performance of “Pearl’s a Singer” in the Pasadena Playhouse’s production of Smokey Joe’s Café, that inspired the show’s legendary composer, Mike Stoller, to say she was his “favorite Pearl.”

In the Music Industry, Ms. Thomas Smith is one of the most in-demand female vocalists, with the ability to sing both lead and background vocals across many styles of music. Starting out in the jazz clubs of Minneapolis & New York City, Carly has fronted bands of all kinds, from small jazz ensembles, high-end Corporate Events Bands, to the all-female world music group Angaza. In concert, she performed at the Sydney Opera House in the spring of 2014 as a soloist with “The Music of Queen-A Rock and Symphonic Spectacular” and The Sydney Symphony Orchestra. She has also taken the stage with The Perth Symphony Orchestra and The Richmond Symphony Orchestra. Much to her delight, Carly recently got back to her jazz roots, singing with the Columbus Jazz Orchestra as a Guest Artist for their concert series “A Night at the Movies.” Her voice can also been heard in many films, most notably the Kevin Hart film Ride Or Die with the song “In Time,” which she also co-wrote.

As a background vocalist, she’s shared the stage with a wide range of recording artists, including Country/Pop Superstar Taylor Swift, R&B Legends Patti Austin and Ali Woodsen (The Temptations), Jazz Greats Lee Ritenour and Dave & Don Grusin, and Rock Royalty’s Joe Walsh & Don Felder of The Eagles. Working with some of the best in the business, her television appearances include The Tonight Show with Jay Leno, Late Night with David Letterman, Ellen, Good Morning America, The Today Show, The View, Dancing With The Stars, The X-Factor UK & US, The Tony Awards, The VMA’s, The EMA’s, The Aria Awards, The American Music Awards, & Dick Clark’s Rockin’ New Years Eve.

All the while, Carly has been steadily building a solid resume of memorable acting performances on screen. With guest appearances on hit TV shows like Revenge, Two & A Half Men, Desperate Housewives, Friends, and Star Trek: Enterprise, she’s proven she can stand toe to toe with some of the biggest name stars. While her work in Independent Films and Web-Series such as After School, A Detective Story, Young Americans and Front Seat Chronicles continue to display her depth as an actress and natural charisma on the screen.

Next, Carly will return to sing with the Columbus Jazz Orchestra for the concert series “Home For the Holidays.” The concert will be livestreamed so you can watch it from home! In February, you’ll be able to see Carly on the screen in a film accompanying the release of the video game “Tom Clancy’s Ghost Recon: Wildlands” as “La Gringa” with costar rapper/actor T.I.

In her day job, Carly is a mother and wife and lives in Los Angeles, CA.